I’m scratchin’ my head and I’m thinkin’ to the way-way back when Miss Carol and me moved to the beach to escape cold weather and snow and all the things I hate about winter so’s we could spend our lives warmly tanning in bikinis and thongs and drinking beer and foot-ploughing furrows in the hot sand.

I don’t remember this crap being a part of our Welcome To Your Dream Life At The Beach brochure.

Either somebody lied to us or something else is going on.

I hate this shit.

Miss Carol and me hope your Christmas and New Years are full of tiny sparkly bikini angels surfing into your home on waves of golden light bringing you oceans of happiness in 2011.

I’m constantly amazed that you folks actually take the time of out your busy day to read my drivel and I want you to know much I appreciate your support.

Thanks for everything and I hope all y’all have a wonderful year. 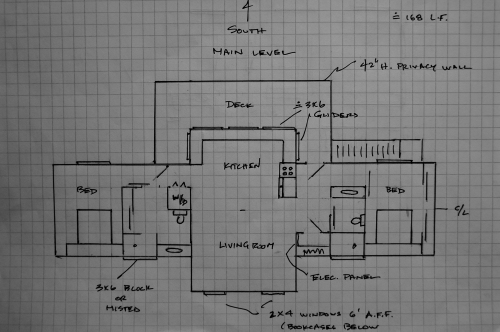 The last coupla days have been a wild ride. After days and weeks and months of stymied do-nothingness, all the sudden we’re riding a riptide of shit happenin’.

This is what went down. Last week Miss Carol and me finalized the floor plans AGAIN for, like, the FINAL TIME? and handed them off to the framer and all the other contractors that need to know where to put stuff.

Attentive readers will notice that I flipped the bedrooms ’cause Miss Carol wanted a hallway and closet and the rest of us will yawn and rub our eyes and say let’s just do this thing already.

Then, last Friday, Wesley, the contractor who’s doing the site work and driving the pilings and installing our much beloved, super expensive septic system got started pushing dirt.

So far we’ve had thirty truckloads of fill sand delivered and spread where it’s supposed to be and I’ve ordered the 31- 22′ 8×8 pilings which are gonna be delivered today and the piling inspection is due tomorrow and I’m meeting Wesley on Monday morning to lay it all out and we should have pilings washed down next week if the weather holds and the construction gods smile fondly on our feeble wantings.

And I know it looks like pretty much what it is- which is a bunch of dirt being pushed around in the middle of a big open field- but it smells like progress.

I can feel it. 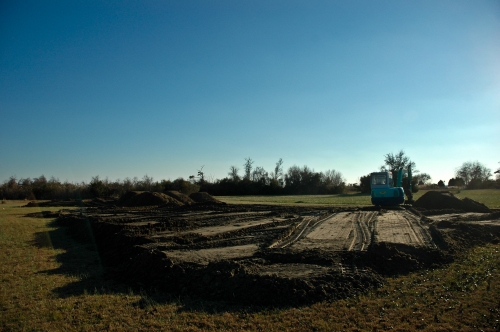 I wrote this post last year and included the recipe for Apple Crack and I know it’s lame to double up on posts and even lamer to foist a link on ya’ll, but this stuff is freakin’ amazing.

Try it and I promise, you’ll believe and come into the light and eventually hate me.

I wrote and re-wrote the stupid Christmas letter that we send out each year, refining it, making it flow, making it something that I didn’t want to just ball up and throw in the trash.

“Is this different from what you wrote before”?

How about some bikinis instead? 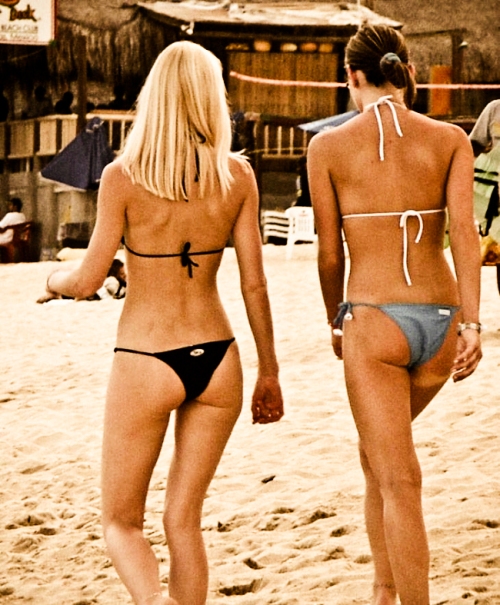 We’re fifteen days into construction and there is absolutely NOTHING going on. After months of permit process and hot on the heels of years of amateur design work and even more amateurish dreams I just can’t seem to push this baby off the cliff and make her fly.

The contractor that’s gonna do the site work promised he’d start on the 6th, or maybe on the 7th at the very latest. When neither happened, I called him repeatedly but cell phones with caller ID are fun things and pretty much guarantee contractors are gonna talk to you when they’re damn good and ready.

Again nothing. So. More plaintive pleas, more unanswered calls and he finally called me this morning to say that he’d DEFINITELY be on-site tomorrow, machines and dump trucks humming. Boy Scout’s honor.

You know, unless it snows.

And, ya baby, you guessed it- it’s supposed to snow tomorrow.

So now I’m thinkin’ Mr. Shithead Site Work Dude won’t start this week and then next week is Christmas and gosh golly can’t be starting anything THEN and after that it’s New Year’s and holy cow give me a break and then before we know it, it’s January.

And I’ve lost another month and, you know, maybe I’m just one step closer to homicide.

Is there anything more sadly pathetic than an unornamented Christmas tree?

It’s Christmastime once again and so once again I dragged a dead shrub into our house and leaned it up in the corner. We’ll cover it in lights and ornaments and call it beautiful.

And it will be.

It’s just Miss Carol and me and Cutter and Tug and I know I could care less and I’m pretty sure Cutter and Tug are fairly unaffected about the whole Christmas thing so that leaves Miss Carol boldly pushing our holiday down the well beaten path.

And you know what?

It’s a good thing she does, ’cause otherwise I’d probably be spending Christmas on a lonely barstool bitching and moaning about life and Cutter and Tug wouldn’t have a blazing tree to bask in.

I loves my Miss Carol.

When I started reading this I was, like, it’s amazingly effervescent.

And then I hit mid-book and I was, like, it’s OK cute.

And then I kept reading even though I didn’t want to, and by the time I finished it I was like, whatever.

I wanted Robert to do BIG- he was a blogger gone novel and I’d wished he was gonna push the envelope.

But he DID get published. And distributed. And all that stuff. And I wish I could say the book is better than it is but it’s not.

And that’s not to say it’s not worth reading ’cause it is- kinda the same way cotton candy’s worth eating.

Around about Thanksgiving I read that a bunch of celebrities like Ryan Seacrest and Alicia Keys and Lady Gaga and a couple of Kardashians and others had decided to stop tweeting until their fans coughed up a million bucks for some goofy charity.

My first thought was- when did celebrities start guilting their fans into paying for their personal charities? (Oh wait. American Idol gives back.)

My second thought was- if it’s so fucking important to Ryan Seacrest and Alicia Keys and Lady Gaga and a couple of Kardashians and others- why don’t THEY stroke a check? Collectively they’re worth billions, and singly they’re worth millions, so why are they trying to strong arm their goofy fans by withholding their blessed tweets?

My third thought was- deeper, but only slightly. Why do we place celebrities up on some kinda gilded pedestal? Like they’re better than the rest of us. Like we need to shine on to them. Like, gosh golly, we can’t possibly live without reading their inane tweets or without watching them accept another nepotistic award or without gazing fondly on their inability to live like the rest of us?

I don’t know much, but I know I’m over that shit.

Then, yesterday, I heard on Howard Stern that Ryan Seacrest and Alicia Keys and Lady Gaga and a couple of Kardashians and the others who’ve tried to force their “fans” to support and pay for their pet charity  have raised almost 200K since Thanksgiving.

Made me wonder if they’re still not tweeting.

Made me wonder if it’s a reflection on our economy or a blowback on celebrity dickweeds.

Made me wonder if there’s a God, and how hard she’s laughing.

The oft prodded slowly awakening juggernaut has been loosed.

I met the contractor whose gonna push the fill around and install the septic system and pilings on Sunday and we put up the construction post with our lot number, building permit, and plans and stuff and made it real.

And I’m excited. Kinda. But I’m also starting to realize what it is I’ve done. I’m an idea guy. I like dangling what-ifs out there over the fence of actual reality. It’s fun and not real and imaginary and therefore, inconsequential. Who cares if I fuck around for three years drawing and re-drawing a make believe house?

And usually, looooong before the reality rubber hits the road I’ve pulled out of the parking lot, tires smoking and squealing. I’ve got lots of other fun thoughts to play with.

But not this time.

Standing there yesterday morning staring at the beginnings of what I had wrought, I suddenly realized that pulling the trigger and doing something is waaaaay different from messing around with the what-ifs and the maybe-somedays. It was a scary grown-up feeling and I didn’t like it one bit. It’s funny-you work for something and then when you get it you’re not sure if you want it anymore. Weird.

So I took a deep breath and thought WTF. We’re gonna do this thing. At some point, you gotta stop dreaming and start doing and keep at it ’til it’s done. I’m sure my enthusiasm will wax and wane over the next several months and I’m pretty sure I might even regret ever having prodded the beast in the first place.

It’s hard to stuff the genie back into the bottle.