Lola gets her voice. 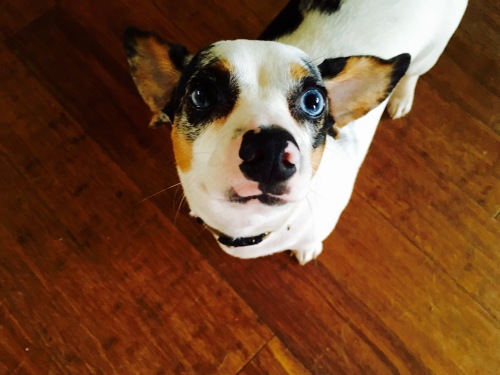 Hey shitheel? I thought as a spun my Me Only Chair around to see our little Lola staring up at me.

Yup. Our little Lola got her voice about a month ago. And what a voice it is- it’s a strange combination of youth and age- kinda like a pre-pubescent Wicked Witch or maybe a 4 yr old with a two pack a day habit.

When am I gonna fucking grow? Lola snarled- Did I mention our little Lola has a bit of a potty mouth?

Well, I said, clearing my throat, you’re not.

You’re not, I repeated. You’re a Chiweenie, so you’re as big as you’re going to get- unless you keep getting fatter- I added.

Lola ignored the fat remark and stared down at her little four inch legs and then back over her shoulder at her hot dog shaped body.

Shit. Doesn’t that just fucking suck, she said, turning back to me.

Not really, I said, You’re a hybrid. You’re a cross between a Chihuahua and a Dachshund and you were bred specifically to maximize the positive attributes of both species such as intelligence and loyalty and minimize the negative aspects of the two species such as temper and aggression.

Oh yeah?, Lola snarled at me, we’ll just fucking see about that, won’t we?

And with that, she spun around and waddled out of the Me Only Room, but not before yipping and snapping at Cutter who had been sleeping at my feet.

Then Lola bounded down the stairs and I started pretending to work again until I heard a sharp bark and then a clang and a growling, scraping sound as Lola flipped her metal food bowl over and pushed it around on the floor.

I think she’s pissed, I said to Cutter.

Cutter opened one eye briefly and then closed it again.