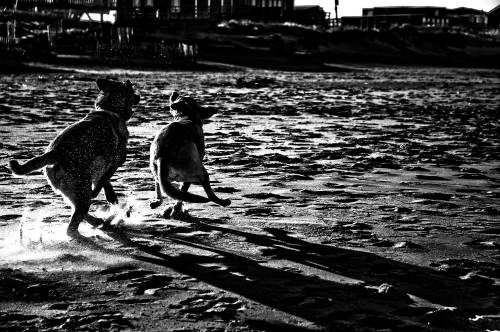 Yesterday was a long dog day.

First off, in the morning, we were walking Cutter and Tug on the beach, letting them run, when this touron woman had a problem with our dogs running free on the same beach as her lovely little chillun’ and grandchillun’. She was screeching and shooing and scurrying and waving her arms about like they were rabid and plague ridden instead of just wet and sandy.

Seems her tiny adorables shouldn’t have to share the beach with dogs. Who knew?

I almost always instantly feel bad about tourons and their inherent goofiness, but when I checked my watch and saw it’s September- it was like, umm, isn’t it time for ya’ll to go the fuck home?

But anyway, in the afternoon, not wanting to endure anymore touron crap, I walked the boys on the street, on their leashes, obeying all the rules and all the other shit the tourons force on us during the season (which, by the way- isn’t it September?), when this OTHER touron woman cruises by in complete Pittsburgh Steeler regalia like she can’t wait to play in the game, shortening up her stupid dog’s leash to keep her/him/it right next to her and murmuring something like “heel” to the poor dog and kneeing it in the head as it tried to meet Cutter and Tug, who’re flailing about like retards, straining like fish caught, at the ends of their leashes, eagerly lurching to meet their newest, bestest friend.

And it was then- watching this prissy little touron and her prissy little dog getting kneed in the face while they walked by-  while Cutter and Tug were yanking and jerking and twin tractor-pulling that I suddenly felt a surge of pride and love for Cutter and Tug.

Yeah, they’re a handful and yeah, they can be a pain in the ass, and yeah they are retarded beyond belief, but ya know what?