Edit time-  I honestly thought everybody on the planet had seen Mishka so I didn’t include any prelude. I mean, I was figuring if I’ve seen it, then, shit, it’s old news, but based on the comment and e-mails, I guess not, so here’s the link to put it all into my retarded perspective.

I’m sure everybody’s seen the Mishka YouTubes by now.

So I checked ’em out tonight. As soon as Mishka started howling I Love You, both Cutter and Tug came barreling into the Me Only Room, sliding to a stop and staring, their heads cocked to one side.

Whoa. What the fuck is that retard, Cutter whispered. Jesus, what an embarrassment.

And Tug said, I know cats that can talk better than that.

Just then Mishka was prompted to say “hungry”, and Tug did one of those sidelong glances over at Cutter that he does and starts imitating Mishka howling hhhooooggroooooo. And Cutter turns and stares at him for a second and then starts giggling. And then laughing. And then Cutter was going hhhooooogggrrrooooooo.

And then they were both jostling each other and howling, caught up in it.

Next, Mishka was trying to say hello and Cutter stopped laughing long enough to go, Tug, check it out- hooooohooooo.

And Tug’s heehawing and nuzzling his brother and pretty soon they’re both rolling around on the floor laughing themselves silly, and then Mishka was told to say “bye, bye”.

Tug and Cutter pause just long enough for their hiccups to stop before joining in the crooning and howling boooooobooooooo and totally collapsing into hysterical laughter again.

I gotta admit it- they were funny.

So when the YouTube finally ended, and Cutter and Tug sat up wiping their eyes, still chuckling,

And Cutter said, can we watch that again? 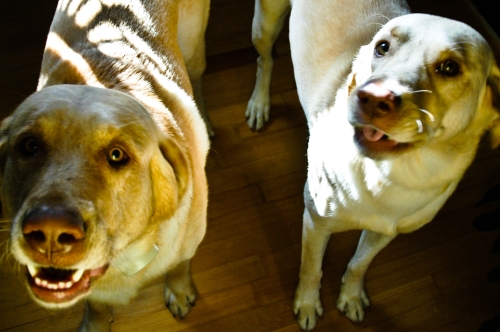 This entry was posted in doggy dickheads, Uncategorized. Bookmark the permalink.

One response to “Mishka.”