Rule of the Bone. 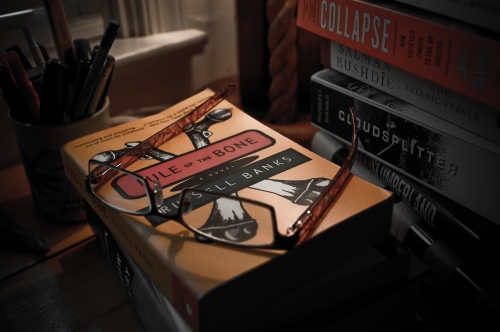 I’m one of your biggest fans, let me just say that right up front. I love you and I’ve read and commented on several of your books and I know my opinion as a critic counts less than nothing in your big scheme of things, but Mr. Banks?

Rule of the Bone sucked.

When I first started reading it I was blown away with your amazingly energetic first person narrative as a 14-year-old fuck up. But’cha know what? as the pages turned, it began to pale and then it got old. And then when you touched on all the same old, same old shit that your generation seems to feel is the root cause of all the fucked-up-itness (divorce, drugs, shitty step-fathers) it just got older and paler. Deep breath.

So I marshaled on, hoping that you’d somehow save it and me.

But you didn’t. Instead, you plunged me into something so completely nonsensical that I kept reading just for the wow, wait a sec, ain’t no way he’s going THERE, factor. And you did. You pushed the limits of credulity. Not only did you verve into ridiculousness but the ending of Rule of the Bone was a pfffft to the rest of the book. The whole mess was a colorless, washed out, weakly supported relationship between Bone and I-Man that could have been colossally moving if you hadn’t decided that telling the story from the viewpoint of a 14-year-old fucknut meant, in your mind, somehow squandering it.

In your defense, maybe nobody could have pulled it off. But then again, maybe nobody should have tried. Maybe at some point you or your editor should have said enough, this is nonsense skipping down the road to silliness.

Rule of the Bone’s a fairly desultory nonsensical ride to an unsatisfying conclusion that left me wondering- did I miss something? Am I retarded?

But I didn’t and I don’t think I am. Retarded, I mean.

I’m just glad that it reads really quick and didn’t squander too much of my valuable time.