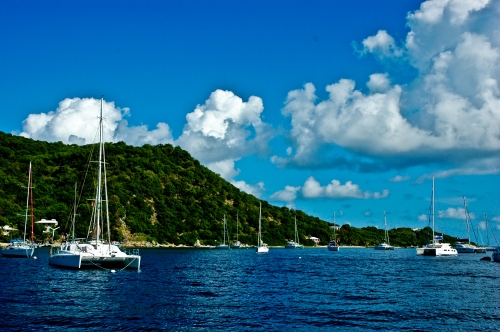 Don’t get tired of the lush green mountains and the deep blue sea. You’re gonna be seein’ a LOT of them. Trust me.

The Queen Princess and the Captains MoRon and Hennifer picked us up at the marina at Nanny Cay. Miss Carol and me had been sipping cocktails and watching the men’s final at Wimbledon and honestly? hoping that maybe they’d go snorkeling or something and pick us up later on.

But it was cool.

As soon as they pulled in the Cruise Director was yellin’ sayin’ that they’d only been able to provision one case of beer because Bobby had been shot. This was going to be an ongoing oft repeated story. Bobby is the owner of the local market and seemingly the provider or owner of every single market in the BVI’s. Every time we pulled into somewhere and the market was either closed or unstocked The Queen Princess reminded us that Bobby had been shot five times but he wasn’t dead and the islands were still reeling from the impact.

Captain Ron snuffled and told us he was sick and that it sucked to have a cold on vacation.

Captain Mo stared dreamily at a horizon only he was seeing.

So while Miss Carol and the Cruise Director and Hennifer went and bought more beer and stuff from the Bobby’s at Nanny Cay which was surprisingly unaffected by Bobby’s bullets we sat and drank looking out over the world that was gonna be our world for the next week or so. Sitting on a boat in a marina is nice.

We loaded up and motored over to Norman’s Island and snorkeled for awhile and then went to Cooper’s Island and grabbed a mooring ball and settled in for the night.

We went ashore for dinner at Cooper Island’s restaurant. (A quick aside- every little island in the BVI’s seems to have one little restaurant catering to  and waiting for the boating crowd ’cause there’s no other way for anybody to get there and I wonder what they do in the off season?)

The food was really good, but what sticks in my mind is this- I ordered a beer and a shot. She brought me a huge, like 24oz, Red Stripe and a martini glass full of whiskey.

I don’t remember much else.

Wait! Except that there was this older, obviously very wealthy, woman dining with a very young man at a table near ours. We were all betting on whether he was her son or her boy-toy.

I’m guessin’ its fun to be rich.