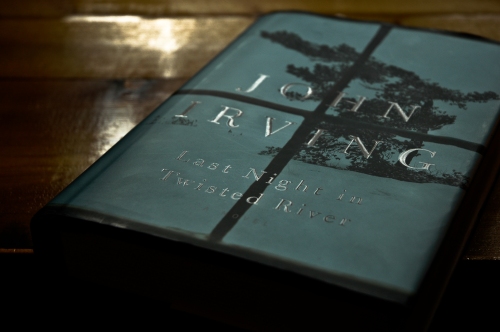 I used to read everything John Irving wrote, loved his storytelling, his quirky characters and the back-to-front, future-to-present timeline he uses in his stories.

But then I stopped. Reading him, I mean, and I don’t know why.

Whatever the reason, I’m glad I did.

Last Night in Twisted River is John Irving’s twelfth novel and, I think, one of his best. Ranks right up there with A Prayer for Owen Meany and The Cider House Rules if you ask me.

The novel opens in 1954 in a Coos County logging camp. Following an unfortunate and accidental murder the logging camp cook and his 12 year old son are forced to flee Coos County and become lifelong fugitives. They are protected (shielded?) from the implacable constable who doggedly pursues father and son across the decades by the cook’s oldest and best friend, Ketchum, a larger-than-life logger who had previously sworn to the cook’s late wife to always take care of them even though he’d been unable to save the life of a young newbie logger whose name and wallet lead the cook and his son to the first of their new lives.

The story continues, following father and son throughout their years on the run as they move and change their identities and try to live normal lives in the aftermath of that unfortunate and accidental murder, staunchly protected by the ever vigilant Ketchum who stays behind in Coos County to keep an eye on the implacable constable.

Last Night in Twisted River is the darkly tragic story of lifelong friendship and love between the logger, the cook, and his son. It’s a great read even if, towards the end, John Irving injects a bit too much of his politics and even if the ending itself is a little, perhaps a tad, a touch, maybe a trifle, implausible?, it’s still one of those books that you don’t want to ever end, one of those books that you’d like to move into the pages of and live with the characters.