There you are sitting at home alone ’cause Miss Carols’ gotta work on a Sunday and you’re hungry. Or maybe you’re a single dude and you just woke up and you’re trying to remember the chick’s name sleeping and snoring next to you and you’re hungry.

You whip yourself up a quick Bacon Burrito Brunch.

It’s oh so easy and oh so satisfying and oh so impressive to the easily impressed. For two hearty burritos you’ll need four eggs, four slices of bacon, two slices of cheese (any kind’ll do), two tortillas, and some hot sauce.

And salt and pepper, but that goes without saying.

First off you start the bacon.

No, No, NO, wait just a sec– first you make the obligatory Bloody Mary. Brunch ain’t brunch without Bloodies.

The best tasting and easiest way I’ve found is to get you some of this.

Just pour some vodka over ice and add ZingZang. All the spices and stuff that you normally have to mix together are already in there so all you need to do is stir it with your finger and drink. If you really want to impress remove the label and tell her it’s your own secret recipe.

OK. So now you start the bacon. Put a frying pan on medium high heat and lay the slices in there when it warms up. While you sip your Bloody, looking cool and in charge, turn the bacon occasionally until it browns and then transfer it to a paper towel to soak up the grease while you cook the eggs. 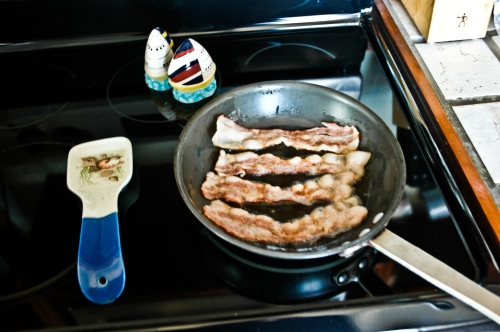 Does everybody love bleary blurry food photos as much as me?

When the bacon’s done Miss Carol almost always gets ANOTHER frying pan down to scramble the eggs which is just plain silly. Instead, just pour some of the bacon grease into the sink, saving about half, and wipe any excess off the bottom of the pan with a paper towel and you’re ready to scramble you some eggs.

Sip some more bloodie lookin’ all chef-like and-

Turn the heat back on to medium high and crack four eggs into the hot grease. Don’t worry about whipping them in a bowl and adding milk and all that. This is much easier and much tastier.

But just as bleary and blurry. 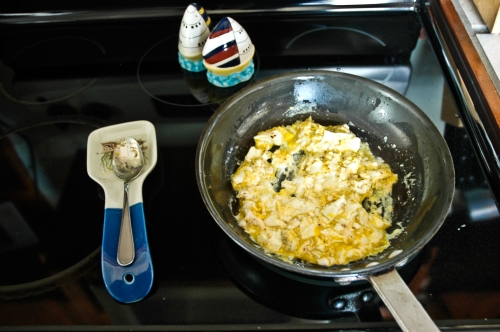 Did I mention blurry?

Put a tortilla on a paper plate and pop it in the microwave for 30 seconds. When it’s warm soft mexican goodness, break a piece of cheese in half and place the halves down the center of the hot tortilla. Add half of the eggs, two slices of bacon, some hot sauce if you want and mix another Bloody Mary and voila’. 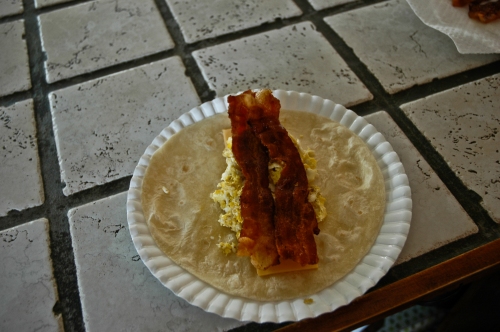 A Bacon Burrito Brunch for two or maybe just a Sunday pig out for one.

Regardless and whatever, the best part? 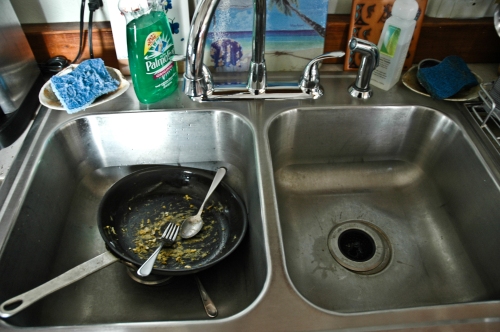 Sometimes I just gotta hug me I love me so much.

This entry was posted in doggy treats. Bookmark the permalink.

One response to “Bacon Burrito Brunch.”