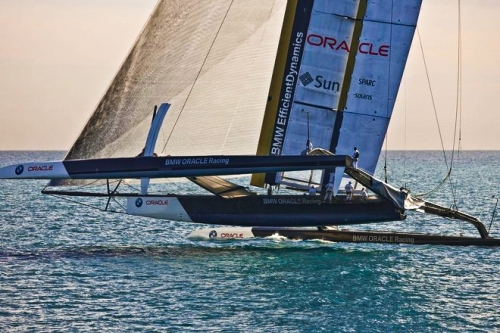 Friday marked the start of the final match races of the 33rd America’s Cup Challenge.

And before I could publish this post it was over.

On Sunday BMW Oracle, the US team, beat the defenders, Swiss Alinghi, 2-0 in the best of 3 series bringing the Cup back to America.

Normally I can take it or leave it. I mean, I enjoy watching the America’s Cup for the beauty of the boats and the choreography of their crews but it is such an elitist sport that it’s hard to feel one way or another about the teams competing. Basically it’s a bunch a really rich guys playing with their new toys.

But this year was different.

This year I really wanted to see the America’s Cup.

The difference was the multi-hulls. For the first time in the Cup’s history (ever since Dennis Conner surprised everyone by showing up with a catamaran which was, at the time, kind of a stretch of the rules. Kinda, sorta, like cheating?), catamarans and trimarans were being raced after a judge decided that the mathematical definition blah, blah, blah of the 12 meter rule blah, blah, blah could be interpreted to include multi-hulls and blah, blah, blah, BLAH.

The result being the 113 foot USA17 trimaran and the 115 foot Alinghi 5 catamaran tearing up the waters around Valencia, Spain.

Even if you don’t like sailing or sailboats or uber-rich guys spending millions and millions of dollars building and racing boats that are so cutting edge that they’re practically obsolete by the end of each Challenge, its hard not to appreciate the fragile ballet of these things.

Not to mention the speed. These catamarans and trimarans will top out around 40 knots and average 15-30 knots in as little as 5-10 knots of wind.

Whatever the reason, they just look scary cool and I really wanted to see it but evidently it wasn’t being televised. At least not here.