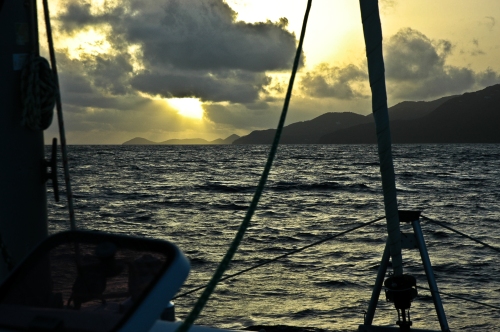 There’s a certain bittersweet longing remembrance that clings cloyingly to these kinda vacations and the enforced closeness that jams us all together and rubs us up against one another, peeling away layers.

For all of it, I know I’m gonna miss living with and being with The Queen Princess Cruise Director, The Captains MoRon, and chirpy little Hennifer. And honestly? My friendship with these friends has deepened and broadened. It’s taken on a whole new level and color.

I poke fun but I realize how deeply I like these people.

I got up at 4:30 and finally took a shower. After seven days of blissfully salty decadence it was time. I HAD to do the marine shower thing. I’d avoided it- not because I long for a dirtier and stinkier me but because I hate me a marine shower.

Imagine standing, hunched over in a tiny cramped little closet bathing with the little shower gun from your kitchen sink and that’s exactly what it’s like. It’s like being peed on. Gently.

But I knuckled down and did it.

And then, while Miss Carol slept on, I joined Captains MoRon in the predawn darkness on the bow and we three stood thinking long deep thoughts on the week past. Or maybe just ticking off the minutes of another hangover and staring retardedly.

It’s always so hard to tell.

And that’s what we did, we yanked the mooring and headed over to Cane Garden Bay in the early morning light and Captain Ron dinghied us over to the dock and the waiting taxi and that was it.

Would we do it again? Nah. And not because of anything but because of everything. We’ve done it, and done it twice. Life’s too short to repeat.

One response to “Kiss me goodbye.”