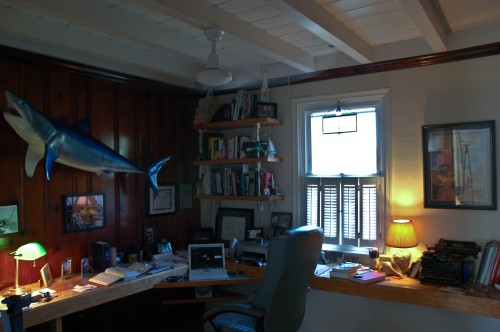 I’m stranded in my Me Only Room.

A little over a week ago I was walking Cutter and Tug and I was wool gathering instead of paying attention and a couple of tourons walking their dog managed to surprise me.

Cutter and Tug were in the sandy grass next to the road and were able to really get some traction and pull mightily towards their new best friend that they were bound and determined to meet.

Normally we either let them run the beach or when we walk them on the road we try and keep them on the road because there is less traction on the asphalt when they’re trying to meet new people giving me a better chance of holding onto the little muscle heads.

But, like I said, this time I was surprised. I managed to get them pulled back away from the tourons and their dog and back onto the road but as I walked away I could feel something clippin’ in my left knee.

Later that night it was stiffening up and by the next day I couldn’t bend it. I started popping aspirin and, hoping to walk it off, continued to work; hobbling around on my good leg.

That didn’t work and it just got worse as the week progressed and became the weekend. I certainly wasn’t going to miss out on the holiday weekend so I iced it when I could and continued with the aspirin prescribed by Dr. Oceandoggy. On Sunday my brother and I tore down a shed that I’ve been meaning to get rid of and by the time we were through with that nonsense my knee was really swollen and tight as a drum.

On Monday I finally succumbed to Miss Carol’s badgering and went to the doctor. They told me it was swollen, which I knew, and that the fluid causing the swelling was probably also the cause of the pain, which I suspected, being the doctor kinda guy I am.

Speaking of doctors- any time a doctor tells you something is going to be uncomfortable and then leaves the examination room and returns with reinforcements you can bet it’s not going to be uncomfortable at all, it’s going to be downright painful. And it was. He produced a needle the size of a ball point pen and, while they held me down, stuck it in behind the kneecap and into the joint, sweeping it around trying to siphon up the fluid. Once is never enough for this kind of thing so they did it twice, once on each side of my knee.

The doctor is hoping that it’s not a tear in the ligaments or tendons or whatever so after the needle fun he gave me a prescription for an anti-inflammatory and sent me on my way telling me to stay off my feet and call him in a week if it’s not getting any better.

And here I am. Stuck in my Me Only Room writing long, whining posts because I don’t have anything else I can do. I can’t go anywhere because I can’t drive my truck because I can’t work the clutch. I’m stuck. It’s a really weird feeling this humbling helplessness. I’ve never been laid up unable to do the things I want or need to do.

My brother and his girlfriend rolled into town on Thursday evening for the holiday weekend pushing 84 hours of future fun before them and bringing plenty of beer and alcohol to add to the already overflowing stockpile we had accumulated in our garage. When my brother and I get together it’s kinda like a train wreck, but in a good way. Something to be survived and remembered and reminisced about. Like a marathon.

It was three and half days filled with laughter and good food mostly dominated by Miss Carol’s barbeque that we hope to soon be selling online if I can just get my shit together and get the necessary permits and licenses and insurances and lease the kitchen and staff it and build the website and jesus god is this a lot of work. But I’ll get it done somehow ’cause it needs to be done. We’ve received so much positive feedback in the last year of test marketing that we feel pretty good about it.

But more on that later.

One of the many things that we squeezed in this weekend in amongst the beach and stuff was a run over to Blue Pete’s on the other side of the bay for appetizers and beers. It was a beautiful night to be on the water and one of those evenings that make you really appreciate everything and everybody in your life and kinda cushions the cold hard slap of reality of the Monday morning that’s always hovering, a dark shadow on the horizon.

I know it sounds like the entire weekend was one never ending 4th of July party. And it was. But we did take some quiet time to thank our founding fathers for their sacrifices and the greatness that is America.

Or at least I think we did.