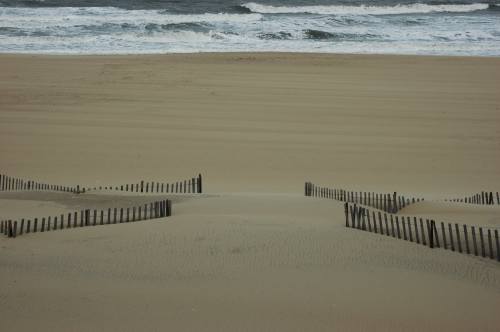 Firstly, and really, this is it for the weather, NO SNOW. Loser weatherdudes had it all wrong. As late as this morning they were predicting 3-5″, which is pretty much unheard of in this neck of the woods, er, beach. The schools closed, the city closed, folks at the market this morning were talking about staying on the island and hunkerin’ down, drinkin’ beer and hangin’ out. And nothing. Not nada. Kinda’ like my striper fishing.

Dos. I’m finally letting Cutter and Tug run the beach. This is huge for me. I don’t know why it is but I’ve been really leery about letting these guys roll. Even though Tug has taken off a few times Cutter has always stayed close so I don’t know why I worry so much but I do. Maybe I’m becoming a pussy. When Boca and Largo were alive I thought nothing of running a couple of miles on the beach, knowing they were following me somewhere up in the dunes. Cutter and Tug get out of sight and I freak like a little girl. I’m such a sally, but I’m getting better.

Tres. Like anyone cares. I weighed myself tonight and after two weeks of no carbs I’ve gone from 195 to 188. Not svelte by any measure but certainly closer to something Miss Carol wants to see in a thong.

Fourthly. Our new President was sworn in today. Having lived in the DC area years and years and years ago, I was amazed to see the turnout for the inauguration. I only hope he’s different. You have to realize, I’m just a little jaundiced with the whole election thing. I voted for Clinton and hated him by his second term. I voted for Bush and likewise hated him.