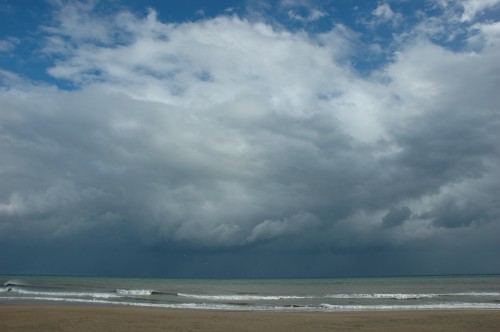 Today it had seemed, at least on the face of things, that the fish catching gods were aligning themselves in my favor. I sparkled with confidence. The birds were workin’, dive bombing bait fish, (OK, they were a ways out), the solunar table was calling for a major feeding time at 10:32,(OK, it was 11ish) and it was sunny. What’s not to like? Surely the striper were lining up, just waiting for me and my rod.

I got my gear ready, donned my hip waders, and marched up to the beach, certain that I’d be bringing home the bacon, er, striper. Miss Carol was brimming with pride and anticipation.

And I fared the way I normally fare. Which is to say I got skunked. Nary a nibble.  After standing waist deep in 40 degree water for an hour and casting like a man possessed, I came up empty handed. Zero. Zip. Nada. Apparently, there were no marginally suicidal rockfish on my stretch of the beach willing to make me come home a hero.

This isn’t anything new. It happens to me a LOT.

So I came home and put all the fishing crap away and took Miss Carol to a bar we frequent and bought some rockfish instead. Blackened. It was way good.