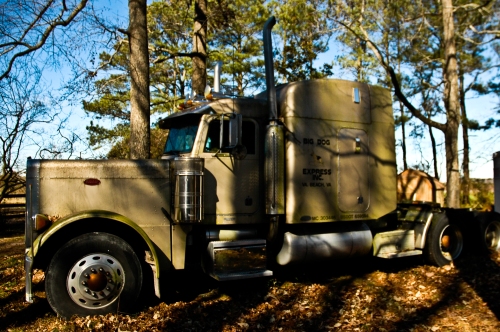 Ever have one of those days that when you wake up you think are gonna go one way but then they bitch slap you and spit you out and become a totally different day from anything you could’ve possibly imagined?

Too bad. ‘Cause Monday was one of those days for me. I woke up thinkin’ I’d be doing one thing and instead, did something wholly, completely different.

Let me add some backstory -driving back and forth to work on The Little House of Horrors I’d noticed a Peterbilt tractor that just sat, going nowhere. Trucks are expensive and expensive to let sit so I finally screwed my courage to the sticking place and stopped on Monday morning between trips ferrying gasoline and generators to Phabulous Phil to see if it was for sale or what.

A curious little old man who spoke a language I couldn’t understand showed the truck to me, indicating in his feral manner that it seemed to be for sale but that he couldn’t possibly tell me who owned it or how much they might be asking.

After much grunting and groany gesticulating I thanked him and drove away. But I was hooked. She’s dirty, she’s been sitting for five years, but she’s cool and she’s everything I ever wanted in a truck.

The exposed stacks, the dual air cleaners, the rocket launcher ID and cab lights, the air horns and train horn, the 13 gear tranny,  cleaned up I imagined she’d be perfect.

Unfortunately, I’m still tied up at the hospital and Miss Carol likes me home nights so I contacted an old buddy of mine who just got his CDL to see if he’d be interested in driving for me. He could drive 80 or 90% of the time and I could spell him and go out on the road when my schedule and Miss Carol let me.

‘Cept this morning I went back early and spoke with the widow of the owner. Turns out he was an ex-cop that bought the truck new in 2001 and drove her until he was diagnosed with lung cancer in 2006. He tried to keep her up and running until last year when his cancer just got too bad and he was forced to watch her sit and rust while he died.

His widow is asking a pretty high price for her mostly ’cause I don’t think she wants to sell. And I can’t blame her, but the math isn’t working out right now so I don’t know.

But man, I want her. 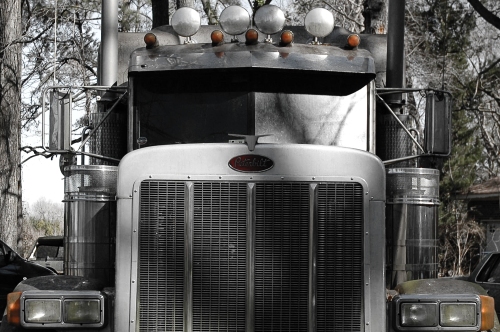