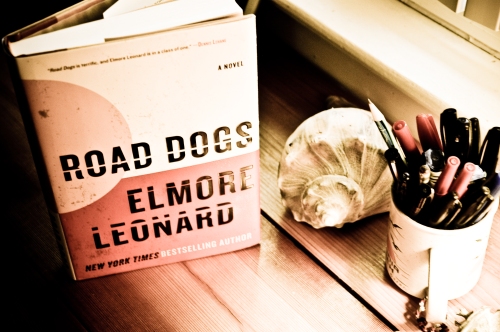 Reading Elmore Leonard is a lot like eating chiffon. Or cotton candy. It’s a lot a fun, it’s real good, but there ain’t a whole lot there, if ya know what I’m sayin’.

Leonard’s latest, Road Dogs, is no exception. And that’s fine. Lots of times you don’t want to read something that makes you think too much or too hard. Sometimes you just want to be entertained.

And this is a great book for those sometimes.

Foley and Cundo meet up in the Florida prison where Jack has been recently sentenced to 30 years and to where Cundo has been transferred to finish the last half dozen years of his sentence.

They become road dogs, slang for convicts watching each other’s back, and Cundo hooks Foley up with his high powered attorney who gets Foley’s sentence reduced to roughly the same half dozen years.

The years pass, and.

Jack is released earlier than Cundo so Cundo pays him to go out to Cali and check on his angel-but-not-quite-wife, Dawn Navarro, until he gets out a couple a days later.

And ya know what?, most all of this happens in the first few pages of the book.

The rest of the story circles around the post prison week that they all spend together.

It’s always surprising what can happen in a couple a days time.

And there ain’t nothin’ wrong with that.